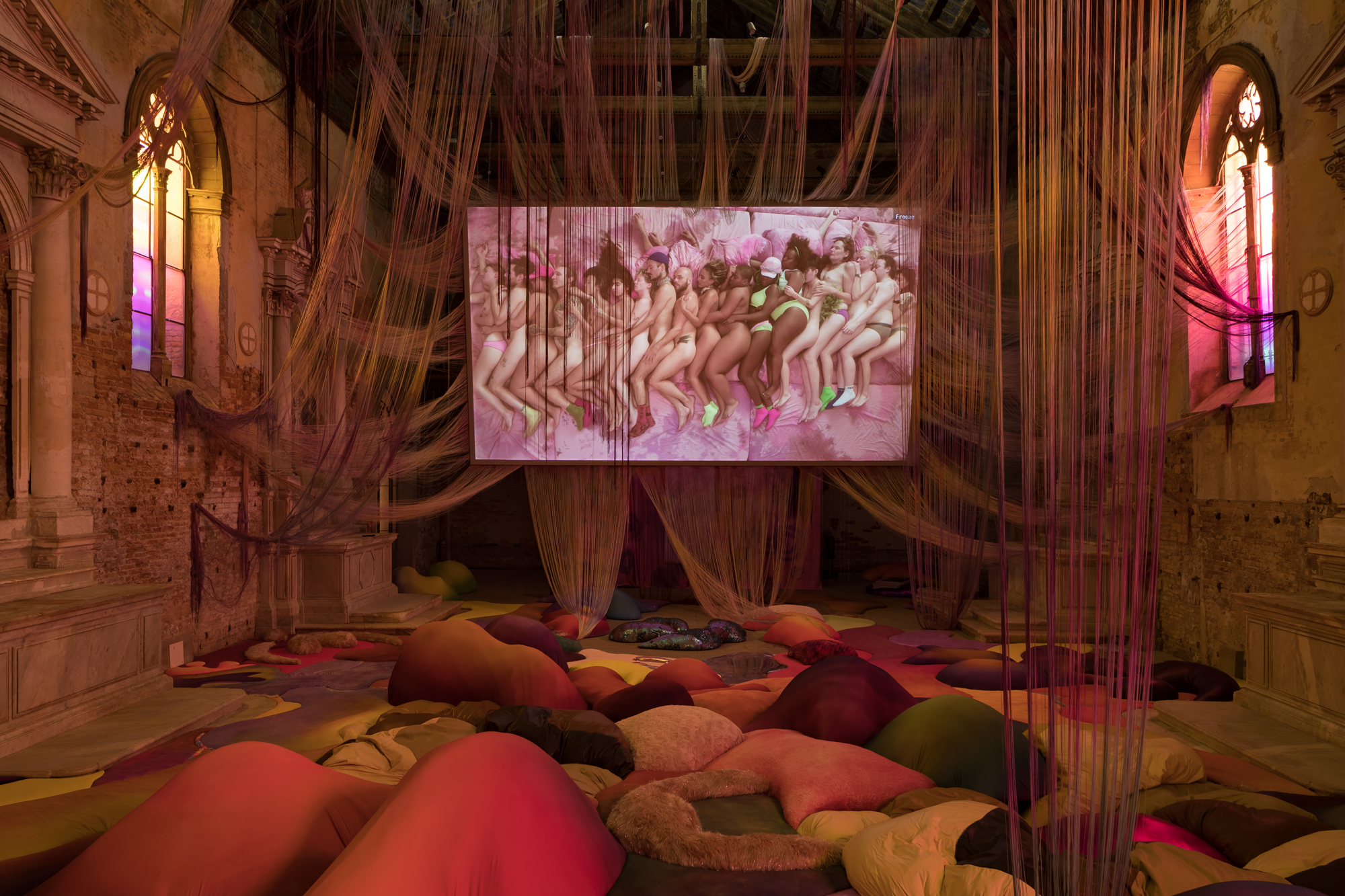 melanie bonajo, Dutch entry for the Venice Biennale as commissioned by the Mondriaan Fund, photo by Peter Tijhuis

Digital eco-feminist, hyper elf, witch or devil, melanie bonajo challenges the traditional divisions between men and women, nature and technology. Through their videos, performances, photographs and installations, bonajo studies subjects related to how technological advances and commodity based pleasures increase feelings of alienation, removing a sense of belonging in an individual. Captivated by concepts of the divine, bonajo explores the spiritual emptiness of their generation, examines peoples’ shifting relationship with nature and tries to understand existential questions by reflecting on our domestic situation, ideas around classification, concepts of home, gender and attitudes towards value.

Since 2015, melanie bonajo has been working on their monumental Night Soil Trilogy, consisting of Night Soil – Fake Paradise (2014), Night Soil—Economy of Love (2015) and Night Soil – Nocturnal Gardening (2016). Night Soil is a trilogy of short documentaries presenting progressive (sometimes illegal) approaches through the portraits of ayahuasca consumers, sex worker activists or women farmers. Progress vs Regress was released in 2016, followed by Progress vs Sunsets in 2017. This new Trilogy examinines extinction or endangerment of vulnerable groups through techno-capital development, but also extinction in an abstract sense, extinction of feelings and thoughts. TouchMETell is bonajo’s most recent film (2019). In collaboration with Michael Beharie, melanie bonajo released a music album called Single Mother Songs from the End of Nature (2019), produced by Bonnefantenmuseum.

melanie bonajo will represent The Netherlands at the 59th Venice Biennale, 2022. They will be working with a curatorial team consisting of Orlando Maaike Gouwenberg, Geir Haraldseth and Soraya Pol, and collaborate with Théo Demans for the scenography. The work will be presented at the Chiesetta della Misericordia in the Cannaregio neighbourhood in Venice.

melanie bonajo studied at the Gerrit Rietveld Academy and completed residencies at the Rijksakademie voor Beeldende Kunst in Amsterdam (2009-10) and at ISCP in New York (2014). They had their first international solo exhibition in FOAM, The Netherlands (2016). The Frankfurter Kunstverein followed with a major solo exhibition in 2017: ‘Single Mother Songs from the End of Nature’ . In 2018, Bonnefantenmuseum Maastricht presented their solo exhibition ‘The death of melanie bonajo: how to unmodernize yourself and become an elf in 12 steps’.

melanie bonajo contributed to several art magazines, was creative editor of Capricious Magazine, and curated various shows, such as the QQC Performance Festival about pop music in visual arts at Paradiso, Amsterdam. They published several books, the most recent being: Matrix Botanica, numero 1 – Non-Human Persons, designed by Experimental Jetset and published by Capricious Publishing (New York). In 2013, they released an album with her band ZaZaZoZo (in collaboration with Joseph Marzolla) called Inua.

We are extremely happy and proud to announce that melanie bonajo will represent The Netherlands at the 59th Venice Biennale in 2022. bonajo will be working with a curatorial team consisting of Orlando Maaike Gouwenberg, Geir Haraldseth and Soraya Pol. The scenography is in collaboration with Théo Demans. The work will be presented at the Chiesetta della Misericordia in the Cannaregio neighbourhood in Venice.

When the body says Yes

Commissioned by the Mondriaan Fonds.

Earthbound – In Dialogue with Nature

Esch-sur-Alzette, the European Capital of Culture in 2022, LU