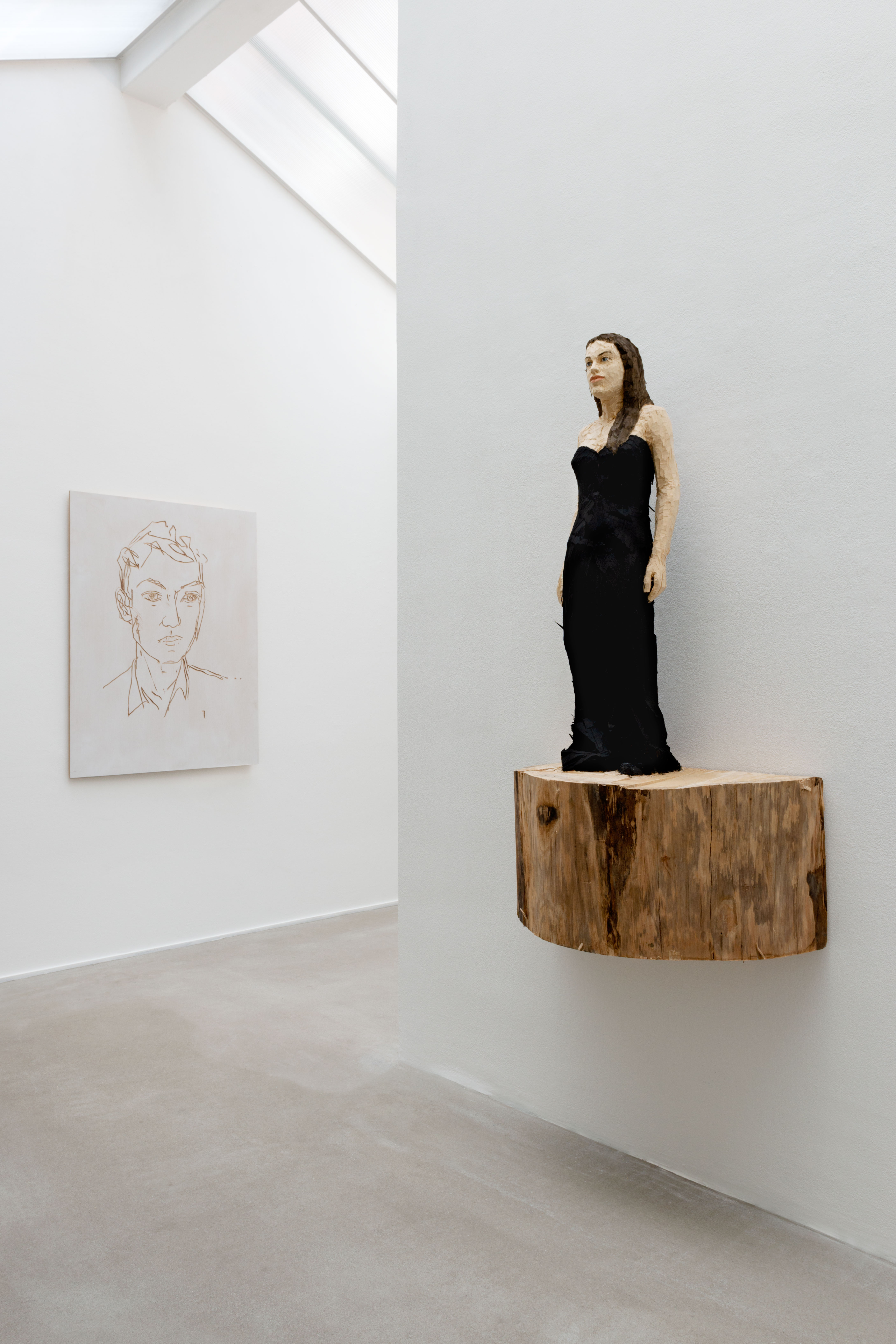 With his sculptures, usually carved out of one massive block of wood, Stephan Balkenhol was among the first artists of his generation to reintroduce the figure to contemporary sculpture. With a hammer and chisel, the artist gouges his figures out of the tree trunk. He takes no effort to hide the shavings and traces of the tools visible in the wood with its knots, grain and cracks. Rather this is part of the work – an inheritance that was perhaps passed on by his minimalist teacher Ulrich Rückriem. In most aspects, however, Balkenhol did not follow the Minimalist and Conceptual trends he was exposed to as a young sculptor. Inspired by the social and political changes of the 80’ s, the artist felt it was necessary to reinvent the figure “to resume an interrupted tradition”.

Lodged in the temporal and stylistic continuity that extends from ancient Egypt, through medieval polychrome wood statuary to Renaissance portraiture, Stephan Balkenhol’s much sought-after figures are archetypes, aimed directly at the onlooker, summoning up ideas about what it is to be human, instead of forcing them into a private mythology or idiosyncratic preference of the artist. In the 1990s Balkenhol added animals and hybrids, and more recently architecture to his artistic vocabulary. His practice also comprises drawings and photographs.

The consistent simplicity of Balkenhol’s sculptures, each fashioned by his own hand, without the aid of assistants and with minimal use of machines, make them all the more relevant in a fragmented and mediatised modern environment. In the mid-1980s, Balkenhol began taking on commissions for outdoor works. He installed two of his sculptures on London’s River Thames by placing one on a buoy and another near Blackfriars Bridge. There are installations at the entrance of the Hamburg Zoo; at the Städelsches Kunstinstitut in Frankfurt, in Kassel and Leipzig, Germany, at the Forum romanum in Rome, Italy and in Chicago and San Francisco, USA. In May 2018, a fountain made by Stephan Balkenhol has been unveiled as part of the project 11 fountains, in Sneek, Friesland, The Netherlands.

Stephan Balkenhol (1957, Fritzlar, Germany) attended the Hochschule für Bildende Künste in Hamburg from 1976 – 82, with tutors including Ulrich Rückriem, Nam June Paik and Sigmar Polke. He has exhibited widely in galleries and museums around the globe, e.g. major solo exhibitions at Lehmbruck Museum, Duisburg, DE (2020) Museum Jorn, Silkeborg, DK (2020), Centro de Arte Contemporáneo, Malaga, ES (2018), the Moscow Museum of Modern Art, RU (2016), Austrian Landesgalerie Lin, AT (2014-2015), Kunstmuseum Ravensburg, DE (2014), Musée de Grenoble, F (2010-2011), Deichtorhallen Hamburg, DE (2008-2009), Staatliche Kunsthalle Baden/Baden, DE (2006), the National Museum of Art, Osaka/Tokyo, J (2005), Sprengel Museum, Hannover, DE (2003), Fries Museum Leeuwarden, NL (2001), Von der Heydt-Museum, Wuppertal, DE (1998), and the Hirshhorn Museum and Sculpture Garden, Washington D.C., USA (1995). He has made a number of sculptures for the public space throughout Europe; e.g. Germany, Italy, France and the Netherlands and in the USA. Balkenhol was awarded the French Order of Arts and Letters (2014). Stephan Balkenhol’s works are in many museum collections, including the Hirschhorn Museum and Sculpture Garden in Washington, The Museum of Modern Art (MoMA) in New York, the Tate Gallery in London, the Museum für Moderne Kunst in Frankfurt, the National Gallery in Berlin and The Museum of Art in The Hague.

Stephan Balkenhol’s fountain of Fortuna, part of the project ’11 fountains’ in the context of Leeuwarden as Cultural Capital 2018, has been unveiled on May 18, 2018 in Sneek, Friesland, The Netherlands.