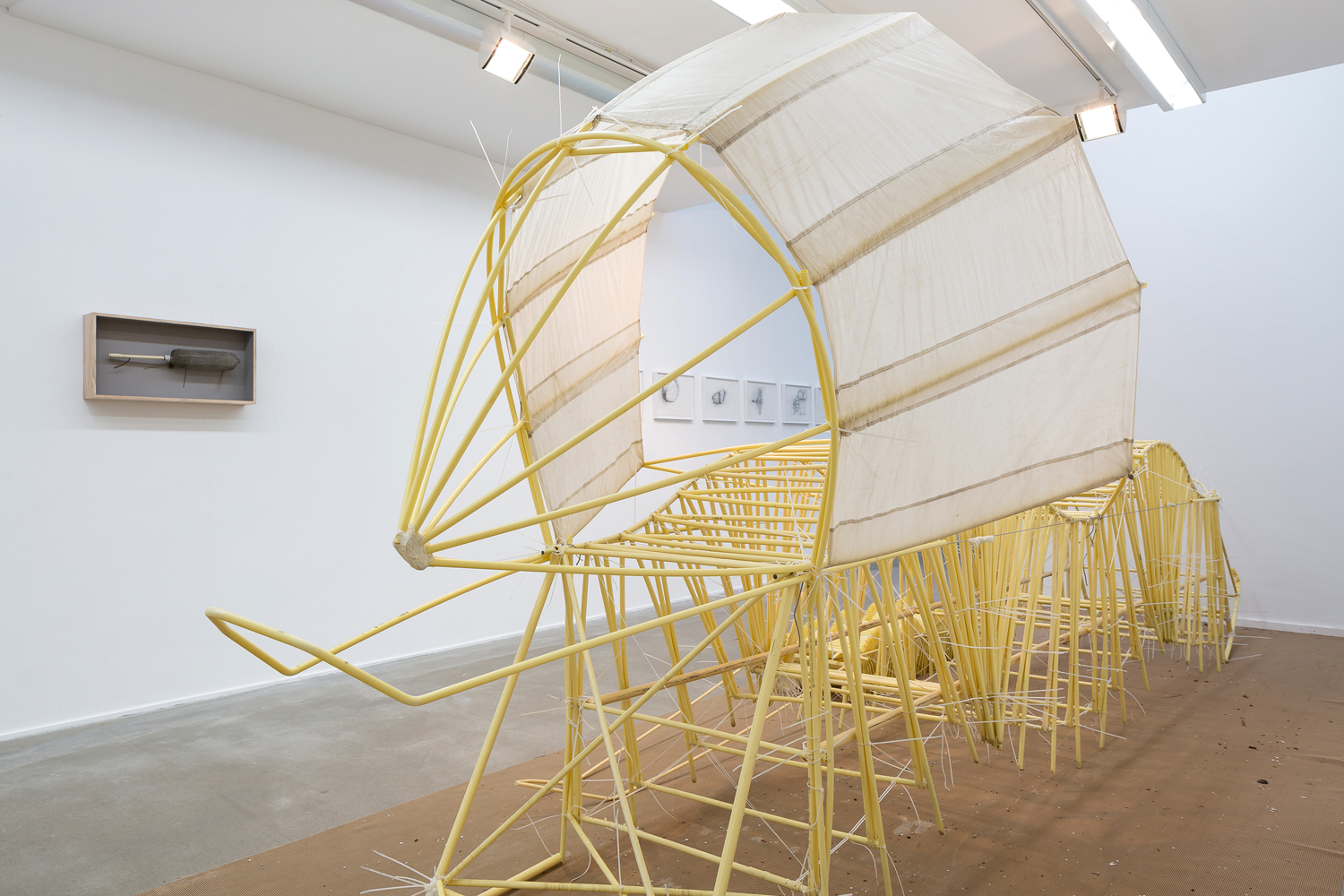 Theo Jansen studied physics at the Delft University of Technology from 1968 to 1975. Driven by his interest in unconventional technical constructions and the mechanism of evolution, he develops as an artist. Throughout his oeuvre, Theo Jansen developed a deep understanding for the principles of life and the evolution of species. Slowly his beach animals came to life, initially intended to solve the danger of rising sea levels by moving grains of sand from the bottom of the beach to the top. It started with the Anima­ris vulgaris (1991), the common (vulgaris) animal of the sea (maris). Later generations of beach animals moved on the energy of wind, moved grains of sand, developed ingenious walking patterns and eventually could run independently on air pressure in PET bottles (‘stored wind’). To give an example: there was the Sabulosa (1994) who had four fins and was able to dig and the Umerus (2009), the suicidal animal that re­gularly broke its own backbone. At AKINCI the Animaris Ordis (ordinary beast) from the Cerebrum (period of the brain, 2006-2008) will be shown, alongside the Animaris Uminami and Animaris Chalibs, both from the Bruchum (era of the caterpillars, 2016-now).

The artist states that his animals get animated by the wind, which inspires movement. The movements of his beings usually cause a fascination with the viewer, due to the idiosyncratic nature of complex move­ment patterns, which appear organic and are reminiscent of living beings. The structures are clearly re­cognizable as artificial, but they still evoke the organic walking and motor skills of long-legged insects or caterpillars. Although Jansen’s constructions lack intellect and free will, and the artist remains the human author, their autonomous movement processes makes one forget this. The viewer develops the assump­tion – through emotions and cognitive knowledge – that motor skills are the hallmark of a living being.

Theo strives for self-reliance of his beach animals; according to him, they should be able to live inde­pendently in flocks on the beach. So far, most of his animals are extinct after a season or two. Some can be resuscitated. While they have no metabolism, nor do they reproduce autonomously, Jansen sees the ability to move and respond to environmental conditions as the basic characteristics of artificial life and intelligence which he continues to develop.

Click here for a trailer of A Boy’s Dream by Walther Grotenhuis, Cinta Forger, IDFA Competition for Dutch Documentary.

Theo Jansen exhibited in many leading art institutions around the world, including Frankfurter Kunstverein, Frankfurt, DE (2019); National Museum of Science and Technology Leonardo da Vinci, Milan, IT (2019); Fundación Mar Adentro, Santiago, CL (2018); San Fransisco Exploratorium, USA (2016); Tamagawa En­nichi, Tokyo, JP (2015); Palais de Tokyo, FR (2015). He gives lectures about his work worldwide. In the Ne­therlands he showed his animals in and around leading art institutions, including Elektriciteitsfabriek, The Hague (2014); Boijmans van Beuningen, Rotterdam (2011); Kunsthal Rotterdam (2003); Centraal Museum, Utrecht (1999); Westergasfabriek, Amsterdam (1994). He holds public demonstrations on the beach at Scheveningen. Jansen lives and works in The Hague. The computer program that Theo Jansen developed for his beach animals in 1991 became internationally famous. In 2016, NASA invited him to a think tank that designs autonomous engines for future space missions to Venus. Jansen has many admirers world­wide, who use the unique mechanics of his work as a starting point for the development of fundamental ideas in the scientific and arts field.

From 1986 to 2008 Jansen wrote the column ‘Reflection’ in ‘de Volkskrant’. A selection of these were pu­blished in the book ‘Klimmen in de lucht’ (Climbing in the air). In 2002 he won an oeuvre prize at the Wit­teveen + Bos prize for Art + Technology. In 2007 Jansen published the book ‘De Grote Fantast’ about the development process of his beach animals. In 2014, the photo album ‘Strandbeest: The Dream Machines of Theo Jansen’ by the Russian-American photographer Lena Herzog was published. In 2016 Jansen received the Brilliant Artist of the Year 2017 award, in November 2017 he was named Artist of the Year 2018 and in 2018 he received the The Hague Culture Prize. In 2019 he received the Pierre Giannadda Prix de la Fonda­tion at the Academie des Beaux-Arts in Paris.